Rembrandt is generally considered to be the greatest of all the Dutch painters and one of the greatest painters of all time. Biographers usually demarcate his career in three parts: the 1630s when he painted portraits; the 1640s when he painted larger, formal paintings of groups of men; and the later period when his paintings became dark and mystical. With each successive change his reputation diminished. 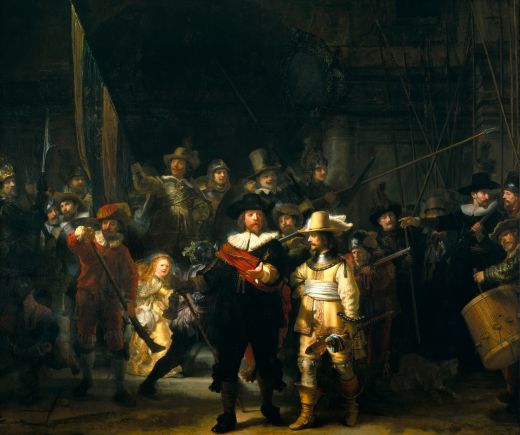 The Night Watch was painted in 1642, when he was 36 years old and still popular. Originally titled The Company of Captain Frans Banning Cocq and Lieutenant Willem van Ruytenhurch, it depicts 29 members of the civic guard.

“What I like most about this painting are the expressive faces and beautiful period costumes. But I also like the dramatic diagonal lines formed by the flags and weapons that point to both sides of the frame. This seems to open up the center of the painting where the two primary figures, Captain Cocq and Lieutenant Ruytenhurch, are seen marching forward, leading their men. This central area is bathed in a beautiful amber light. (The dark hues associated with Rembrandt were the result of the varnish he used to preserve his paintings. The Night Watch, when it was finally cleaned in the 20th century, was clearly meant to be a daytime walk.)”