Sunset in the Rockies 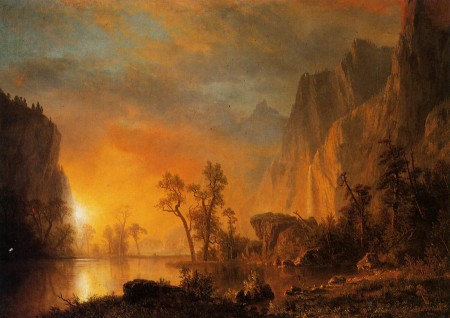 Sunset in the Rockies

Bierstadt’s scenes are representational but hardly realistic. He alters the scenery for dramatic effect. Here you can see some examples: ice-blue water, a green foreground, blue-green mountains fading hazily into the distance, white-capped mountains. Genre elements – Indians, soldiers, and animals – are placed in the foreground. Sunset in the Rockies is a large painting that was executed in 1866. It exhibits the awesome or the sublime, a popular subject for paintings at that time.

Albert Bierstadt was born in Dusseldorf, Germany and emigrated to the United States in 1832. He spent his childhood in Massachusetts. He did not paint anything until he was 21. At age 23, he returned to Dusseldorf, where he spent four years studying painting in the approved German Romantic manner. He returned to the USA in 1857, spent that summer in the White Mountains of New Hampshire, and the next year joined a government expedition to the Rocky Mountains, where he made sketches in oil. His large romantic paintings were very popular. In mid-career those paintings were commanding prices of up to $35,000 – a fortune by today’s standards. Bierstadt is considered the leading painter of the Rocky Mountain section of the Hudson River school of artists who specialized in grandiose mountain scenery.