The Oath of the Horatii Between the Hands of Their Father 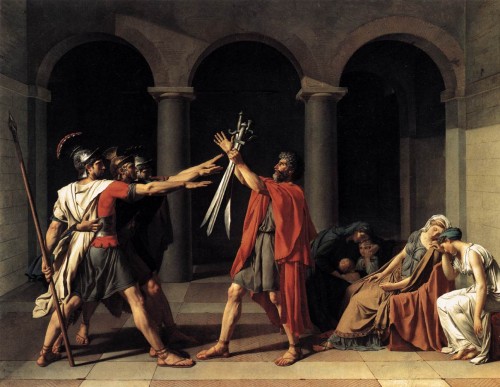 Jacques-Louis David is generally considered to be the artist who broke from the European painting traditions of the Renaissance (Baroque and Rococo) and returned to Greek and Roman classical art, Neoclassicism.

At a young age, he established himself as a history painter. However, his aim was not to document history but to use it to raise political and moral questions, questions that were being asked outside of academia in the private salons of Paris and other European cities.

The Oath of the Horatii was painted in 1785. It was a big achievement for David because it beautifully demonstrated a new idea of what painting could be. It is said to be the painting that launched the style of French painting that David was to dominate for the next 40 years.

The image is from a well-known classical drama, Horace. We can see Horace’s three sons pledging to fight and even die for the honor of Rome. Coming as it did just before the French Revolution, one can imagine how daring and incendiary this painting was.

In addition to his subject matter, David broke with other traditions here. The size of the canvas was different than what was required by the Academy. And the painting evidenced an abrupt change from all expectations of conventional composition and style.

Take a look at The Oath of the Horatii compared to The Musical Contest by Jean-Honore Fragonard, painted in 1754-5. You can see how different they are. 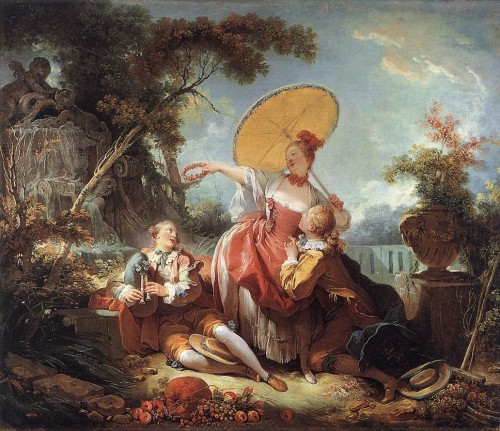 Both paintings employ the classical triangular format, with the primary action at the apex and in the center. But in contrast to the curved forms of Fragonard’s subjects, David’s men are depicted with straight, rigid lines. The colors are different, too. Fragonard’s painting technique is softer; David’s sharper. Also different is the use of light and shadow. David’s painting is starker; the figures more like statues.

You could say – as many have said – that Fragonard’s painting reflects an era of nobility devoted to pleasure, whereas David’s reflects a new age of stoicism and moral fervor.

It would be silly to argue that one painting is intrinsically more beautiful than the other, but I prefer David’s because I find the subject matter inherently more interesting and the treatment of the figures, with their accented muscularity, more appealing.

I’d even go so far as to say that Fragonard’s painting seems essentially decorative. It looks like it is meant to contribute to the pleasing ambience of a room — a wall covering among other wall coverings in a rich man’s chateau. David’s painting, in contrast, demands attention and stirs up thoughts and feelings. It does not support an ambiance but creates one.

The Entrepreneur and the American Dream