The Birth of Venus 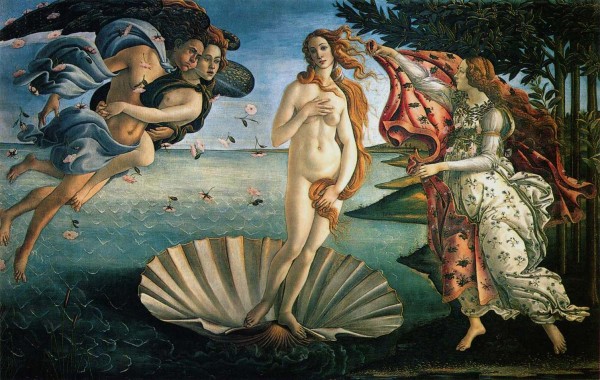 In the 1400s, the world woke up. The Renaissance (“rebirth”) started in Florence, Italy. It spread to Rome and Venice. Then, in the 1500s, to the rest of Europe. Greek and Roman art was rediscovered. Artists became interested in the scientific study of anatomy and realistically recreating the forms of nature. 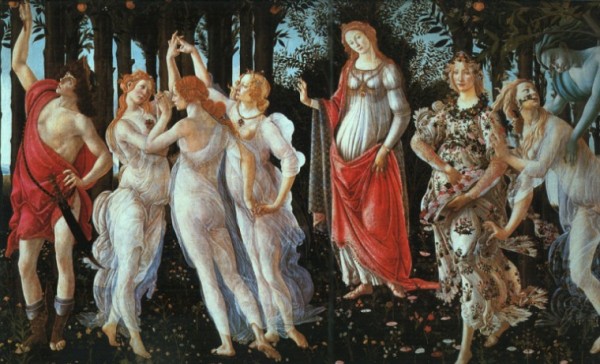 Both are done in egg tempera. But Primavera is painted on board and Birth of Venus on canvas, a relatively new matrix at the time.

In Birth of Venus, Botticelli depicts a story told by the classical poet Hesiod. Venus, the Goddess of Love, arrives fresh from the sea on the first day of creation, blown in by the wind gods, Zephyr and Aura. One of the three Graces is ready with a cloak to cover the modest, nude Venus and transform her into the mother and goddess of all the forces of creation. Botticelli has posed Venus to look like an ancient Greek sculpture.

My colleague, Mark Ford, likes that this painting is at once identifiable as a product of the 15th century and an image that feels very modern.

He points out neoclassical elements in the subject matter and the arrangement of figures on the field. Venus, the central character, stands in the middle. Subordinate characters on either side, bending toward her. This forms a rough triangle, a very common shape in neoclassical paintings.

What makes it modern, he says, is its flatness. There is some perspective in terms of the relative size of the figures in front and the landscape in back. But the overall impression is that there is little depth of field. This gives the painting a geometric, almost abstract, quality that he associates with some modern landscapes.

Mark also loves the colors — the skin tones and the colors of the sea and sky. These are brought into prominence by the relative darkness of the trees on one side and the wings of the wind gods on the other.

The floating flowers and the half-shell seem almost surrealistic. In fact, the entire image seems more like a dream than an actual representation.

The depiction of Venus as a nude is significant in itself. Prior to the Renaissance, most artwork was based on religious subjects accepted by the church. Nude women were rarely portrayed.

Birth of Venus marks the rebirth of classical mythology in art and is an apt metaphor for the Renaissance.

Birth of Venus and La Primavera are exhibited in Florence, Italy at the Galleria degli Uffizi.