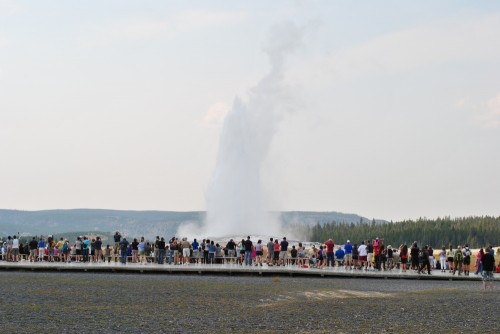 K and I are spending a few days at the Mammoth Hot Springs Hotel in Yellowstone National Park.

The hotel is run by a private operator that has, our tour guide told me, a long-term concession from the federal government. That pretty much amounts to a government-run business, so I wondered what it would be like.

From the outside, the old hotel was inviting – a rambling, wood and stucco building painted lemon yellow and set among pine-covered hills. Just a few hundred yards away were the oddly beautiful hot springs that looked like the dark side of the moon.

Once we stepped inside the hotel, that inviting feeling began to evaporate.
The lobby was an undecorated box of a space, randomly “furnished” with small, cheaply made booths. One booth sold coffee and cake, one was covered with brochures, one sold souvenirs, and another turned out to be the reception desk. In between the booths, people of every ethnicity (presumably patrons of the hotel) sat at formica tables.

I took it all in, thinking, “Whoever designed this place must never have been inside a beautiful hotel.” (In fact, I wondered if he had ever been in a hotel at all.)

“Perhaps the lobby is being renovated,” I told myself. “The rest of the hotel must be fine.”

After spending 15 minutes acquiring our room key from a pleasant young woman who didn’t seem familiar with the computer she worked at, we set off for our room. I was happily anticipating a quaint mini-suite with spectacular mountain views.

My anticipation dissipated in the hallway – an eerily dim corridor that had been spray-painted with that pebbly paint that was so popular in the 1970s. Ugly, incandescent lamps illuminated the ancient plumbing that ran along the ceiling. Doors peeked open as we passed. The experience was disturbingly reminiscent of The Shining, where Jack Nicholson prowled a similarly creepy hotel.

Our room was tiny – barely large enough to accommodate a queen-sized bed, a chair that looked as if it had been purchased at a yard sale, and a sink hanging off the wall. There was no TV and no air conditioning. The bathroom was so small you could use the toilet and shower at the same time.

As far as the view was concerned, we had a single small window that looked onto two garbage dumpsters in the parking lot.

Of course, you don’t go to Yellowstone National Park to luxuriate at a fine hotel. You go to hike and fish and ride horses and all that. And if you are into that sort of thing, Yellowstone gets five stars. The Rocky Mountains have a unique sort of beauty that you can’t find anywhere else in the world.

We are here for the tenth biannual Ford/Fitzgerald Cousin Camp, a gathering of 40 family members spanning three generations and 80 years. We began sponsoring this event 18 years ago so our children could get to know their cousins. That goal has been happily achieved. The eighteen cousins, most now in their twenties, clearly enjoy being with one another.

The Cousin Camps have also been a good way for our siblings to stay in contact and for our children to know their grandparents and grand aunts and uncles. (It is quite possible that we will have a fourth generation at the next Cousin Camp, a prospect which I am undeniably looking forward.)

If you have youngsters, you might consider this sort of thing.

When the cousins were younger, we chose destinations that were suited to children (e.g., Disney World in Orlando and Ski Camp in Colorado). Now, we go to places that they might not otherwise see themselves as busy adults. (Two years ago we took a cruise in Alaska. Next time we may go to Antarctica.)

I’m not much of a mountain man. However I signed up for all the mountain-manly events that K suggested. These included paragliding (I am afraid of heights), fly fishing (enthusiasts consider it “fun” to do this for seven hours straight!) and white-water rafting (disappointing if, like me, your target experience was formed by watching Deliverance six times).

I did my best to enjoy these outdoor adventures. But what pleases me most is sitting outside in the evening, smoking a good cigar and writing to you. As it happens, this is what I am doing right now, on the second evening of our sojourn. I’m smoking a Padron Anniversario and typing away on my laptop. I am within twenty yards of three scarily large elk that have come down from the mountains to graze on the lawn in front of the hotel. The only thing between me and that lawn is a little railing.

If you have never been to Yellowstone or the Grand Tetons, consider experiencing them with seasoned guides, as we are doing. Mountain guides are invariably rugged young men with diverse and interesting backgrounds. One of our guides, for example, was a biologist before exiting civilization. Another was a college professor. And another was a gourmet cook. For whatever reason, each of them came to the Rocky Mountains and decided to stay.

They are full of amusingly forbidding facts. (“This cactus’s needle will make your ankle swell up like a watermelon.” … “Nursing elks will shred you faster than an angry grizzly bear.”) They are also environmentally evolved, taking every opportunity to educate us. (“The animals are the rightful inhabitants of the wilderness. We are their guests.” … “A true fly fisherman always throws back his catch.”)

Now the Ford/Fitzgerald clan has been politely to enthusiastically interested in learning about the great outdoors. But we have all been burdened with a natural love of irony and an irrepressible penchant for the cynical remark. When Guide Henry was explaining how dangerous grizzly bears can be, young Aiden asked, “Do you have a lot of bear-on-bear crime here?” Guide Henry explained, with the utmost seriousness, that they had “none” of that. Aiden leaned over to me and whispered, “That is the first time one of my jokes has ever gone over anyone’s head.”

So that’s one piece of advice I can give you. When conversing with a mountain man, don’t “dis” the great outdoors or its denizens. It would be like dissing Allah while touring Saudi Arabia.

Another thing mountain men don’t like is comments about how big a bull moose’s testicles can be. (Although if you see one, as we did today during a hike in the mountains, you will find it difficult to hold your tongue.)

And if, at dinner, you see “elk meatballs” on the menu, don’t ask if they are “minced or served whole.”

Speaking of dinner, the restaurant and lounge here, although situated in a relatively new building, was apparently designed and decorated by the same person who did the main hotel. It opens up like an airplane hangar, with no discernible ambiance (except, perhaps, that which you’d expect from an army mess hall).

The hostesses greeted us as we entered and led us to our tables. They were, as everybody in this part of America seems to be, young and energetic. And so long as we followed their rules, they were pleasant. But there were a lot of rules. (And we suspected that many of them had been made up on the spot to thwart our freedom.) We could not seat less than three or more than four at a four-top, even though there were at least a hundred unoccupied tables. We could not visit a neighbor’s table without getting dispensation. We were entitled to one small orange juice with the buffet breakfast, but not a drop more.

The minute one of us pushed the envelope, we all got the glares and the eye rolls and the retreating mumbling.

The experience was half Disney and half penitentiary dining. In other words, it was what it must have felt like to dine in a government-run restaurant in the Soviet Union. The employees’ mandate was not so much about pleasing the customer as it was about making sure that he behaved like a proper citizen.

I left the restaurant thinking that the reason America feels “free” (to the modest extent that it still does) is not because our government is more enlightened than socialist governments. It is because most of our experiences in America are still crafted by private enterprise in a competitive, free-market environment. But when we are in an environment like this, one that is effectively run by our government, it feels uncomfortably Soviet-like. It is the same feeling we might have when interacting with government workers in order to renew a driver’s license, get a building permit, or go through airport security.

If you want to have a successful restaurant in America, you must seek to please the customer – to make him feel like he, not you, is always right. But that is not the goal of the government bureaucrat. His duty is to ensure that the government’s needs are met as efficiently as possible. The primary obstacles to that efficiency are usually impudent individuals who have the nerve to want things done “their” way.

It’s not that the people who are “helping” you are bad people with malicious minds. It is just that they see themselves as representing the government, and they see you as a “problem” that they are trying to correct.

But to be fair, this is just day two. I hope to be able to share more sanguine observations in my next letter.

Are You a Leader or a Team Player?

How Every Decision You Make Can Make You Richer – or Poorer