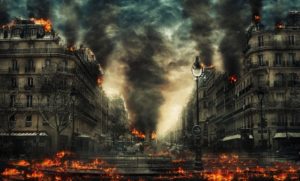 “When I despair, I remember that all through history the way of truth and love has always won. There have been tyrants and murderers and for a time they seem invincible but in the end, they always fall – Think of it, ALWAYS.”

The phrase “end of days” – once so silly to me – whispers from the shadows of my mind.

For so long it was global warming – abstract and years away – and the occasional drought or storm. Now we have hurricanes, earthquakes, tsunamis, and forest fires, one after another.

The frightening but mostly remote threat of Islamic terrorism now seems like a secondary concern as our president and his North Korean counterpart threaten each other like angry schoolboys but with nuclear annihilation in the balance.

And that’s not to mention the mass murders within our borders.

We are living in a world where murder and mayhem are commonplace. Where the horror of a real war seems not just possible but imminent. And while we wait hundreds die every day.

Yet most of us must go about our daily routines. I do. But with a slightly different feeling in my gut. An alien emotion. I feel vulnerable.

I suppose it’s how Israelis and Palestinians feel. Notwithstanding the constant threat of terrorism, war, and even annihilation, they find for themselves a new normal. A way to do the things we’ve always done in the USA without fear: working, shopping, eating, and even attending outdoor sporting and musical events.

It’s unlikely that the massacres and acts of terrorism will subside unless we do something different than we’ve done so far. Which has mostly been to spend money stupidly. Stupidity, they say, is doing the same thing and expecting a different outcome.

As for the natural disasters… it’s impossible to say with certainty whether they will continue or abate. But so long as they continue, we can be certain that this shadow of doom will be upon us.

The big threat, of course, is World War III.

What You Can Do to Protect Yourself… Starting Now

* Identify Your Enemies and Make Friends of Them

Whenever I’m afraid of anything, I deal with it first by doing something I call “making friends with the enemy.” By the enemy, I mean the absolute worst outcome. With respect to today’s discussion, two of my worst fears come quickly to mind.

Being killed wouldn’t be so bad if I believed in a conscious life after death. Since I don’t, I can’t console myself with that. But I can make friends with my fear of death by reminding myself that it is likely to be not like sleeping but like being unconscious – deep under general anesthesia. I’ve experienced that many times and it never hurt. It was… nothing.

The death of a loved one is worse because I’d have to endure it. Making friends with that enemy is a matter of facing it – imagining it and then imagining myself accepting the grief and carrying on. The more you imagine this, the less scary it feels.

What are the odds that you will be shot dead by some madman with a “personality disorder” when you are in a crowd? A calculated guess: less than two million to one.

* Be a wee bit more careful when you travel.

You don’t have to be afraid to travel overseas. But you can reduce the possibility that you will die at the hands of a madman by being selective about where you go.

You can, for example, feel comfortable traveling with a guide through Israel and Brazil. But you might not want to take a motorcycle ride through North Africa.

If you are at or near a location where gunshots or explosions break out, don’t go toward it, looking to help or simply to see what’s going on. Get away safely. Quickly. Then turn on your TV.

If you are going to an outdoor concert or other venue that is likely to be crowded, wear dark and indistinct colors.

Upon entering any public space, take note of where the exits are.

* Don’t believe the myths or lie to yourself.

Don’t believe for a minute that the USA could “wipe out” North Korea (or any other country for that matter) with zero or few casualties. And don’t tell yourself that war is “good for the economy.” It is not. When something of value is destroyed — and this includes everything from material objects to human life — the world is less for it.

* For each imagined disaster, have a plan.

You don’t necessarily need a personal bomb shelter and a year’s supply of canned food. But you can become aware of what safe (or relatively safe) shelters there are in your neighborhood and figure out how to get there fast.

By doing the above, you will feel stronger and smarter. And this will give you confidence if, one day, you do face a disaster. It will also give you the ability to influence those around you, and

this will have untold beneficial effects. Like a pebble dropped in a still pond, your energy and compassion will ripple out to the people who know you… and the rest of the world.

In times of crisis — just before hell breaks loose — there is a void. It is the moment at which time seems to stand still. Everyone stands silently, stupefied, waiting for something to happen, someone to say something.

It’s time for you to fill that void — just a little, perhaps — with the best that is you.