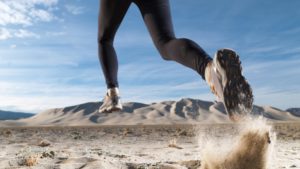 I remember the day that my older boys and I had a breath-holding contest. It was my idea. I had just been trounced by the two of them in an underwater-propulsion contest. (Imagine human torpedoes bouncing off pool walls.)

“Holding our breath? You just want to do something you can win at,” No.2 son Patrick astutely pointed out. (I had apparently abused them with my breath-holding-gold-medal-at-Club-Med story several times.)

They relented. And I handily won the first round. But my time was only 65 seconds, not Club Med gold level. Two more rounds followed. I maintained a slight lead. Our times were 1:10, 1:25, and 1:30. Then, on the fourth round, something surprising happened. Patrick held his breath for 1:50 and beat us all!

It was an astonishing feat – 25 seconds better than his till-then best.

If you have normal lungs and have no experience holding your breath you can easily do it for up to about a minute. After that, it gets uncomfortable. At about a minute and a half, your lungs feel as if they might explode. Time slows. Each consecutive second lasts longer. Getting to a minute and 50 seconds meant Patrick had to endure an awful lot of pain.

Can you guess what happened next?

You probably can. I demonstrated fatherly wisdom by putting my life at risk. On the verge of losing consciousness, I somehow forced myself to stay under water for 2 minutes and 5 seconds.

It was a remarkable and edifying experience. I had felt I had reached my absolute physical limit at one minute. I could not – I was sure – go more than a few seconds longer.

And yet, thanks to this silly competition, I managed to double that time.

Why You Should Stick Your Own Head Under Water

Among the characteristics one needs to succeed, nothing is more important than endurance.

Doing something you are good at takes no special effort. But getting to the top… succeeding at the highest level possible… means traveling down a long road of pain.

Pain, in the long run, is failure’s greatest weapon. And pain grows stronger and longer the closer you get to the top.

Tony Robbins (among many others) says there are only two human motives: an attraction to pleasure and a fear of pain. Of the two, fear of pain is the stronger.

How much you can do – as compared with how much you are doing now – may be, as I discovered in my underwater experiment, a difference of 100%. Getting that much extra out of yourself will almost certainly require you to develop a higher resistance to pain.

Review your goals. Ask yourself honestly what pain you fear. Is it boredom? Tedium? Hard work?

Think about it. But not too long. Because your salvation is not in figuring out why your lungs burn after 60 seconds but in forcing yourself to put up with the pain a few extra seconds and to do so till you reach your goal.

Whatever your goals may be, you can work harder and longer than you do now to achieve them.

But if you’d like to accomplish more and/or push yourself farther, you can start today by picking out some important goal you’ve been pursuing, noting how much time per day or per week you’ve been working on it, and committing to increase that immediately by, say, 10%.

That extra 10% may be uncomfortable – even a little painful. But after a week or so of repetition it will become your new achievable limit. When you get there, increase your effort by another 10%. This may take a bit longer to get used to, but if you keep at it, that day will arrive.

Some time from now, you will look back on the day you started and wonder why the work you are doing now ever felt like as much as you could do.

And in doing so, you will be able to look back and see how many people with the same goal you passed along the way. At every 10% barrier some will have dropped out. And if you know some of these people personally you may be surprised to see that some of them had more natural talent and other advantages than you had.

You will recognize that, more than anything else, it was your mental fortitude that mattered. As Marcus Aurelius, the Roman emperor and philosopher, said, “There is nothing happens to any person but what was in his power to go through with.”

Our greatest goals – our most worthwhile objectives – wait for us on the other side of pain and panic, doubt and worry, setbacks and frustrating surprises. Achieving them certainly takes some amount of intelligence, skill and ambition. But more than anything else, it takes the capacity to endure.