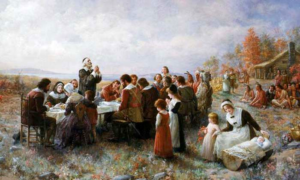 “Thanksgiving Day, a function which originated in New England two or three centuries ago when those people recognized that they really had something to be thankful for — annually, not oftener — if they had succeeded in exterminating their neighbors, the Indians, during the previous twelve months instead of getting exterminated by their neighbors, the Indians. Thanksgiving Day became a habit, for the reason that in the course of time, as the years drifted on, it was perceived that the exterminating had ceased to be mutual and was all on the white man’s side, consequently on the Lord’s side; hence it was proper to thank the Lord for it and extend the usual annual compliments.” — Mark Twain

Like Mark Twain, I tend to make fun of many of the institutions that Americans hold dear. Thanksgiving, for example, makes me spout off about how impossible it is to read or listen to any celebrity or self-help guru without them blathering on about being thankful. “Are they really thankful?” I snort. “And if so, for what?”

I’m a hypocrite, of course. I’ve written more than a few little essays on the importance of counting one’s blessings and have published them predictably on Thanksgiving Day and on New Year’s Day. A double hypocrite really, because those that talk about being thankful are rarely thankful. Those that are naturally and truly thankful don’t have to conjure up and count their blessings. Their enjoyment of life is evident, unspoken, and uplifting. I know such people. A sibling. A friend. A spouse.

And yes, when I think of them, I am thankful — very thankful — to have them in my mostly anxious and ungrateful life.