Will This Be My Last Essay? 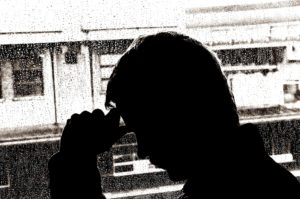 Notes From a Manic Depressive

Wednesday, a week ago:

I’m thinking I should stop writing. It’s hard work and it takes a lot of time.

I’m sixty-seven. And I don’t need to work. I’ve tried to retire three times. Zero for three. I’m still working eight to ten hours a day. It’s not about making money. It’s about… it’s about nothing. It’s a habit. I’m a workaholic. I have to admit it.

When I was young I spent weeks, even months, drifting along happily – superbly unproductive. Those were the days of spontaneous adventure. Nowadays I have these routines. Routines I’ve invented. They make me productive – enormously productive. I am proud of how productive I am. I need to see a psychiatrist.

Actually, I’m seeing a therapist. A very good one. Dr. Jill. In the past I’ve had good success staying ahead of ahead of my therapists, using every trick I had to get them to tell me what I wanted to hear. I was pretty darn good at it. Except for that one who made me cry. I never went back.

I’ve tried my tricks on Dr. Jill. She hasn’t fallen for them. She’s smart. She’s one step ahead of me. I’ve asked her to help me with this hyper-productivity problem. We’ll see. She’s got her work cut out for her.

I think about death a lot. It turns out that’s not terribly unusual at my age. Sixty-seven is close to seventy. And when you are in your seventies, let’s face it, you are playing in the last half of the fourth quarter.

When I think about death I imagine extinction. I allow myself to picture the world without me – with my self, my ego, the thing that is “I” gone. I mean gone, really gone, completely and forever. I believe some people can make peace with death. I can’t. Not yet. I don’t want to die.

I want more time. Time to have adventures. I don’t have that now. I have these schedules. And these habits.

I imagine myself sculpting metal. I’m in my palm tree garden (I’m not sure why), bare-chested, wielding an acetylene torch. (I’ve been told that would be dangerous.) Young people come to see me, asking questions.

I want more spontaneity in my life, more time to play with my grandkids or drive around aimlessly on A1A. Or just sit on the chair on my porch, looking at the street.

But I can’t let go. I’ve been able to limit the amount of time I work on business projects. But then I fill that time with other tasks that I set for myself: writing, reading, learning Italian, playing the French horn.

Why am I practicing the French horn?

When I look at my daily logs (of course I keep detailed logs) I see that I spend about half of my day writing.

I complained about this to my Jiu Jitsu sensei, Renato. He told me to write about my problem of not being able to retire. He said there are lots of people that feel the way I do. “I think they’d like to hear your ideas on that,” he said.

Everything is ebb and flow. Contraction and relaxation.

You don’t have to be manic-depressive to understand that. Think about the universe: It’s ever expanding. Yet there are these black holes, pulling everything in.

I’m writing a book about that. I’ve been writing it for fifteen years. It’s a big subject. The book will probably be fewer than eighty pages.

Today I asked a friend and former colleague (retired for some time now) if he ever thinks about death. “No!” he said, laughing.

He’s a happy man. He’s also writing a book about education in the USA. Why it’s broken. He’s not sure when he’ll finish it. He doesn’t seem to care.

Today I also read an essay by another friend who’s still working. He mentioned that he had fainted after playing ping-pong and woke up thinking, “This is a pretty good way to die.”

Death. Life. War. Peace. Most of it you simply cannot control.