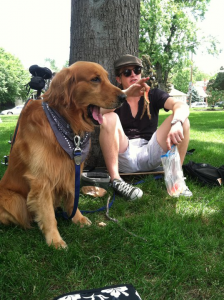 “My little old dog: A heart-beat at my feet.”
– Edith Wharton

When we entered the butterfly pavilion, the manager approached us and said, “I’m sorry, but we don’t allow dogs in here.”

“He’s a service dog,” Michael said, pulling out Jefe’s certificate. “You have to let him in.”

“Please understand. The pavilion is full of butterflies and small birds. It is simply too much for dogs. They can’t contain themselves. If you could leave him here, we’ll look after him.”

I frowned at him as if to say, “You’re overdoing it.”

The manager reluctantly let Jefe pass. But we were followed by a half-dozen staff members ready to jump in when the inevitable melee occurred.

Jefe isn’t really a service dog. His certificate was bought online. But he has always been an amazingly sensible and good-natured animal. We spent a half-hour walking through the pavilion, and throughout he had no fewer than a dozen butterflies on his back and a bird or two for good measure. Not only did he not react, he hardly seemed to notice them. And when we exited, the manager rushed towards us and said, “Oh my lord. He is trained for birds and butterflies!”

Jefe was born in Nicaragua. We bought him as a puppy and kept him there as our Nicaraguan dog. But in Nicaragua, dogs do not have the same importance as they have in America. The people that cared for our house so well cared little for Jefe. After seeing the shape he was in when we came back after having been away for a while, Michael decided to adopt him and bring him back to the States. In the USA, Jefe had a life his fellow Nica dogs could not even imagine. The first week he was in Florida, he had a complete makeover – not only lavish scented baths, a haircut, and a pedicure, but an aromatherapy session and some sort of doggie counseling to boot.

He was, in Michael’s words, the best dog in the world. He was intelligent, responsive, obedient, and kind. He was also playful – as playful as you would want a dog to be. As Samuel Butler said, “The great pleasure of a dog is that you may make a fool of yourself with him and not only will he not scold you, but he will make a fool of himself too.”

As I’m writing this, Jefe is resting in his home in Baltimore with his mistress Maggie, and Michael, his master, is flying home to be with him. He is scheduled to be at the veterinarian tomorrow. His last visit. After 13 years of being a remarkable being on this overpopulated planet, he will breathe his last breath.

Michael and Maggie are crying a lot. Kathy and I cried a bit tonight as well. But I like to remind myself that Jefe lived a long life – more than 80 years in dog time. And he lived the sort of life that we proud humans only hope to live. He had no ambitions other than to enjoy the moments that were given to him. He welcomed the new ones with excited anticipation. He endured the difficult ones with admirable patience. He forgave each and every hurt accidentally put to him. And most importantly, he was always present in those moments, which means that he had millions more of them than you or I.

Jefe will go down tomorrow gently, as he lived. He will not rage against the dying of the light. In going, he will give us the last of countless gifts he has given us along his way.