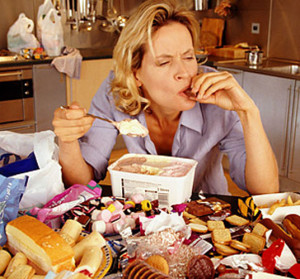 The language police have struck again. According to Dictionary.com, I’m not allowed to describe my bouts of overeating chocolate kisses or over-watching Netflix as “binging.”

The dictionary opines: “When most of us use phrases like binge-watch or gag me with a spoon, we aren’t trying to cause harm. However, our willingness, inadvertent or not, to treat eating disorders, their symptoms, and their vocabulary as a joke means that the 30 million people in the US who suffer from some form of an eating disorder can feel stigmatized, made to feel like their conditions aren’t serious.”

There is method behind this madness, and it’s all about money:

Take a bad habit (i.e., binge eating), give it a clinical-sounding name (binge eating disorder), give that an acronym (BED), register it as a mental illness, get health insurance to cover it, and – bingo! You have created a new billion-dollar industry.

* Get media to promote the idea that binge eating is not bad behavior but a disorder.

* Call in the language police to restrict usage of the term to the “professionals” and, thus, control and protect the asset.

Linguaphile (noun) – A linguaphile (LING-wuh-file) is a language and word lover. As used by Judith Strauss: “I never met a linguaphile I didn’t like.”

Justice was voted “Word of the Year” by the Merriam-Webster online dictionary in 2018. The publisher said the word was looked up on its website 74% more in 2018 than in 2017.

“Ideas are like rabbits. You get a couple and learn how to handle them and pretty soon you have a dozen.” – John Steinbeck

Including:
* Retainers, Jelly-Bean-Sized Projects, and Combo-Writing Payouts Await
* The Hot Debate Among Writers Who Want It All
* 7 Tips to Make Readers Love You

Do Students Really Prefer Socialism?.- I’ve read polls that suggest as many as 50% of US college students favor Socialism over Capitalism. That is not entirely surprising. When I was in college (1969 to 1973), the rate was probably about the same.

When you are in the later stage of your rebellious phase, carving out a radical view of the world is fun and exciting. In my day, though, for the most part we understood what Socialism meant: the forceful redistribution of wealth in hopes of making the world more fair. Today, they have a different idea. They believe that wealthy people acquire their wealth through inheritance, exploitation, and buying and selling stocks – not through risk and hard work.