How to Think “Outside the Box” 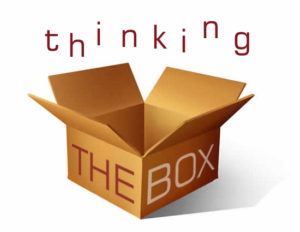 Much has been made of the importance of thinking “outside the box.” To solve difficult problems, it is said, you need the ability to do this. I agree. Completely. Because I’ve seen supposedly insurmountable problems solved by this kind of thinking many times.

The origin of the phrase originated with an intelligence test called the Nine-Dot Box. You’ve probably seen it. Imagine three rows of three dots, each equally spaced, on a piece of paper. The challenge is to connect all the dots by drawing a minimum number of lines. The rules: You must draw a line through every dot once and only once. The lines must be straight (no curves). And your pen/pencil cannot leave the paper.

If you’ve seen this done as a “bar trick,” you know that most people cannot do it with fewer than five lines.

In the case of the Nine-Dot Box, the assumption is that there is an imaginary boundary surrounding the perimeter dots. But there is no rule that says your lines cannot extend beyond that perimeter. By thinking “outside the box,” you can easily connect all the dots with four lines. There are several ways of doing it. (Search “9 Dots Puzzle” on YouTube.)

In fact, you can connect them all with three lines – even a single line if you roll the paper into a cylinder. Torque it so that the dots are at an angle to one other, and then they can be connected with one continuous straight line around the cylinder.

Just the other day, two friends and I used outside-the-box thinking to resolve what had been an impasse.

They were deadlocked on a contract that was working well for one but not the other. The former wanted the contract honored. The latter refused to do so. They were on the verge of litigating.

They knew as well as I did that litigation would cost more than it was worth and would almost certainly ruin their friendship.

But what to do?

We talked about why they had made the deal in the first place. I knew the answer but I wanted them to hear themselves say it.

The basis of the deal was primarily about their friendship: They thought it would be fun to make some money together.

I asked them: “If the contract did not exist, could you find a way to ‘make money together’ now”?

That exposed the unspoken assumption: that the contract as written mattered more than the original intent.

They knew it didn’t. And they knew that the only way to achieve their original purpose was to jettison the contract and make a new one.

So that’s what they did. In less than five minutes they agreed on a new deal that was good for both of them. They were able to move forward without wasting money on lawyers and ruining their friendship.

Next time you run into a difficult problem, think about the hidden assumptions that might restrict the way you approach a solution… and ignore them. You’ll be surprised by how easily and often this works.

Why Do I Make It Sound So Easy?

Study for the Poet King