If I Were in Charge of These Hills

There is an unwritten rule when building your house on top of a hill: Keep the roofline below the treetops. When you violate this rule by setting a two-story structure at the very crest of the hill, you create an ugly and permanent blemish on the profile of that landscape. Any sensitive someone looking at the hill from afar would have his pleasure ruined – the vista’s soft and undulating strata of green interrupted by an ugly man-made block.

We have such violations in Nicaragua, along the Pacific coastline north of Rancho Santana. One of them is a restaurant called Mag Rock (short for Magnificent Rock), a barn-like, three-story structure perched at the top an outcropping of rock that rises above and juts out from the shoreline like a prow heading into the ocean.

Every time I look at it, I get annoyed. What kind of shallow, selfish, and aesthetically demonic person would do this. And stupid. You can get your view, even of both sides, without destroying the tree line. All you have to do is cut the structure into the hilltop. (See illustration below.) 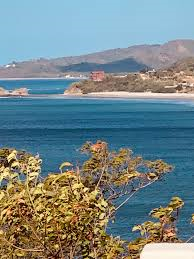 So when Andy and Cecily said how much they enjoyed their lunch at Mag Rock, with its “mag-nificent” view and all, I had to say something.

Cecily decided to ignore me. Andy took me up. I explained my theory about building on hillsides.

I like to think of myself as a classic Libertarian – i.e., that if forced to choose, I’d choose freedom over other social values. But when it comes to beauty – and let’s be real for a moment, sooner or later nearly every ideological view comes down to deeply held views about beauty – I’m a law-and-order monger.

“Lots of people think the world would be better if they were in charge ofeverything. I just want to be in charge of beauty,” I said.

I smiled and thought about it.

“It would be a big job,” I admitted. “I’d need help. Several ministries beneath mine. I’d need a Ministry of Landscape, a Ministry of Architecture…”
“A Ministry of Interior Décor?”

“Certainly. And a Ministry of Attire… and Jewelry… and Watches… and Cars…”

“Naturally. Someone has to set and approve the standards.”

“And would there be penalties? Fines perhaps?”

Seriously, just think about how much better – i.e., more beautiful – the world would be if we could do away with all the ugly things.

Forget about eliminating war and poverty for a moment. Think about how wonderful it would be to wake up each day to a world devoid of aesthetic abuse.

Think of all the things that would not be. Such as:

* Almost any fixture plated in gold

* Which is to say Trump Tower

* Any sort of stretch material on unattractive bodies