Delray Beach, FL.- I’m happy to report that I’ve been contacted by a senior curator at the Smithsonian, who has informed me that they want to put all my published works into the institution, seal them in a vault, and make them available only to scholars in the future, but not to the public. They believe my wealth building writings are too powerful to be disseminated freely. I will update you as this develops. 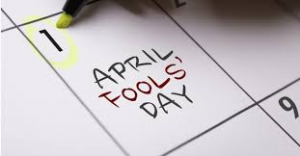 * In the early 1950s, the BBC aired a “news” item about the spaghetti harvest in Switzerland.

* In 1985, Sports Illustrated published a story by George Plimpton about a Mets pitching phenom named Sidd Finch. According to Plimpton, Finch had a 168-mph fast ball (which he credited to meditations in Tibet), carried a French horn at all times, and wore one hiking boot while pitching.

* In 2004, NPR’s “All Things Considered” ran a story about the USPS’s new “portable zip codes” program. Like people being able to keep their phone number even if they moved, the program was designed to represent “a citizen’s place in the demographic, rather than geographic” landscape.

* In 2008, the BBC showed a video clip of flying penguins as part of its “Miracles of Evolution” series. The idea was that the penguins had evolved in this way in order to escape the harsh weather in the Antarctic by flying to South America’s rainforests.

Cozen (verb) – To cozen (KUH-zuhn) is to cheat, deceive, trick. As used by William Bolitho: “The shortest way out of Manchester is notoriously a bottle of Gordon’s gin; out of any businessman’s life there is the mirage of Paris; out of Paris, or mediocrity of talent and imagination, there are all the drugs, from subtle, all-conquering opium to cheating, cozening cocaine.”

Gunderson explodes 9 myths that keep people from achieving wealth. Since I agree and have written on most of these topics, I found the book generally useful and smart.

The writing, though, is second rate. And there are some problems. For example, his arguments in support of cashing in 401 (k)s, taking the 10% penalty and tax hit, and then putting the remaining money into a business or real estate are based on unrealistic expectations of return.

He does make a good point when he says that cash flow is more important than net worth. I’ve said as much many times. And I like what he says about velocity of money. With countries, it is the GDP divided by the money supply. With individuals, it is the output divided by the input. In other words, don’t let your money sit for long periods of time in a 401(k), earning – if you are lucky – 8% and deferring pleasure till you are 65. Use it now to create value (and cash flow) for yourself and the rest of the world.

Man’s search for meaning. Most of the human population don’t search. And for a very good reason. Meaning for them is immediate, coming as it does from the struggle to survive.

Of those for whom survival is not a challenge, meaning is more elusive. Some find it by submitting to a belief system. Others, that prefer to think independently, have a more difficult time. As near as I can tell, it’s never found through any sort of introspection. If it comes at all it comes from work that has purpose.

The wife of a colleague has devoted her life to helping the deaf to hear through advanced medical technology. Take a look at the responses such people have when they first experience hearing. I can only imagine how meaningful it would feel to know that you gave this gift to someone.