“The best work is done with the heart breaking or overflowing.” – Mignon McLaughlin

I’m sitting on the edge of a dirty planter box at the back of the five-star London hotel in West Hollywood.

I have to sit here because I want to smoke a cigar and read. I’d prefer to smoke on my balcony, but the “welcome” brochure of this $500+ a night hotel made it very clear that smoking anywhere but in its two cramped, dingy designated smoking areas is prohibited. Violators are fined $500. 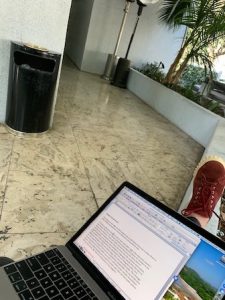 Until the last five or six years, all of the five-star hotels I’ve stayed at provided pleasant places for smokers to sit, relax, work, whatever. These were retreats with the same level of comfort, elegance, and ambiance as you had in the hotel. The only difference was that they were away from the common areas where, understandably, non-smokers should be able to congregate smoke-free.

The smoker retreats were separate but equal. They made you feel like an honored guest with a right to smoke in your own corner of luxury. And that felt good.

But here at The London in West Hollywood, both of the smoking areas appear to have been designed with a very different message in mind: “You may be our guest, but you are nonetheless a deplorable.”

Designated smoking areas like these have been popping up in airports, hotels, and other private-public places all over the world, but they are nearly ubiquitous in Los Angeles. LA, in its evolved wokeness, provides sanctuaries for illegal immigrants and humiliation zones for legal smokers.

Good to Great in Art: Noticing What Has Changed You

The comment was by Anne Lamott. The subject was art – literary art, in particular. But what she said applies to film and theater and perhaps other art forms, too. She said: “To be great, art has to point somewhere.”

I think that is a very useful idea.

Steven Spielberg, for example, has produced many good films and several very good films. But he has also produced one great film – and that was Schindler’s List.

Spielberg’s ET: The Extra-Terrestrial was a cinematic blockbuster and a work that was brilliant in many ways.  It was entertaining. It was moving. And it was undergirded by an admirable though Hollywood-common moral perspective (that what matters most is not our superficial differences but the goodness of our hearts).

I saw it many years ago, and still remember it as being good. But definitely not great.

Schindler’s List, too, had great commercial and critical success. It was more serious than ET, but that is not what made it a better movie for me. The difference between ET and Schindler’s List is that the former entertained me but the latter changed me.

Schindler’s List not only entertained me, it allowed me to recognize what a purposeful life could be. I remember slipping into a protracted bout of self-criticism after seeing it that eventually led to making some important life-altering decisions.

There are other movies that have had a similarly powerful effect on me. A short list would include The 400 Blows, Apocalypse Now, Taxi Driver, and Sunrise: A Song of Two Humans.

You can apply the same standard to novels. I’ve read lots of good and very good novels, but only about a dozen or two that have changed me. Heart of Darkness, The Sun Also Rises, To Kill a Mockingbird, and The Adventures of Huckleberry Finn, to name a few. Crime and Punishment is a particularly good example. It was a riveting story that forced me to reexamine some convenient truths I had come to accept about social systems and human nature.

I have a half-baked theory of what it takes to go from good to great in film and fiction: It must affect me strongly on two planes, which I think of as vertical and horizontal.

The horizontal plane is the social/historical perspective. What a time or place was like – e.g., Italy in WWII or the South under Jim Crow. I need to feel that I’ve learned something that is both important and true.

The vertical plane is about the individual – about what it is like to be a human being. To be great, a film or novel has to get me to examine not just what I believe is true of people but what is true about myself.

Okay, that’s half-baked. And my butt is killing me from sitting on this narrow cement wall for almost an hour. I’ll go into the horizontal/vertical stuff some other time. Meanwhile, what do you think of this idea about good and great art? Does it make sense to you when you consider the movies you’ve seen and the books you’ve read?