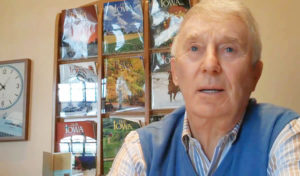 There are many ways to get rich as an entrepreneur. One way is to create just the right product at just the right time. A second way is to identify, and then cater to, a neglected niche market. A third way is to introduce a new and attractive marketing strategy.

He made his fortune by doing all three at the same time.

Reiman got his start by working as a freelance writer and dabbling in magazine publishing. In 1970, he noticed that two farming magazines had eliminated their soft “women’s features” and he sensed an opportunity.

He devised a prototype for a magazine called Farm Wife News. To test the idea, he rented a mailing list of 400,000 farmers from an agricultural company. He sent a copy of the prototype to a tenth of the names, offering six issues for $5. The response was so great that he abandoned the next test and sent the sales package to the entire list.

A few years later, he was publishing 11 magazines aimed at the rural market and enjoying revenues of more than $300 million. His titles, with a circulation of roughly 16 million, included Country Woman, Ranch Living, and Taste of Home.

The magazine market in the USA has always been very large. But it has also been very competitive, with dozens of publications on every popular topic. So how did Reiman do it?

The most desired demographic has traditionally been young and urban. But rather than going after them, Reiman marketed to older, rural readers.

And rather than selling advertising, he decided to make his profits solely through subscription sales and renewals.

Plus, long before “interactive” was the catchword of the industry, Reiman hit upon a way to engage his readers. Reader contributions accounted for as much as 80% of some of his magazines.

Equally important to his success was the way he ran his business. Reiman invited all of his employees to make suggestions. Not just his top people. (In fact, he never posted an organizational chart. “It limits what people can do,” he said.) He actually taped $100 bills near the coffee machine to encourage them. And he didn’t use focus groups or fancy analytics to test new product ideas. He didn’t feel he needed to. Instead, he read customer-service reports and customer correspondence. And he met his customers in person. When a title didn’t work, he sent out a memo thanking his employees for their work and explaining the reason for the mercy killing. “There’s not a big penalty for failure here,” said one of his executives. “We just go on to the next thing.”

Reiman sold the bulk of his business to an investment group for $633 million. A few years later, he sold the rest to Reader’s Digest.

Needless to say, he retired as a very rich man.

So why haven’t you ever heard of Roy Reiman? And now that you have heard of him – and how he became so rich as an entrepreneur – how is that going to change the way you do business?

The Importance of Being Earnest

Boost Your Productivity by Cloning Yourself