Last week Agora had its global publishers meeting in Dubai. 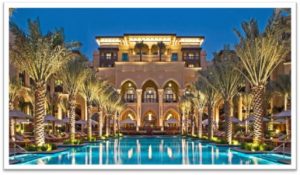 We chose Dubai because it was a compromise location for our publishers that travel from Europe, the Americas, and the Far East. And also because it is a destination that few of them had ever been to.

Dubai is worth seeing. It’s a glittering, ultra-modern city-state built mostly in the last 20 years. And it’s immensely impressive in many ways. Its hundreds of glass and steel skyscrapers are tall – very tall – and very attractive. (If you like glass and steel buildings.) It is incredibly clean. During the six days we were there, I spotted no more than a half-dozen cigarette butts on its pristine streets. It boasts all sorts of world records: the tallest building, the tallest hotel, the largest indoor shopping mall, the biggest aquarium, the longest automated rail network, and the largest indoor ski park, to name a few. And its best hotels – in terms of elegance, amenities, and service – are equal to or better than any that I have experienced.

I wasn’t able to do much writing during the week because the conference ran from 8:30 to 6:30 or 8:30 every day. It was not much fun for K, who had agreed to come along because I had agreed to spend the following week, this week, touring Jordan. The conference ended on Thursday night, so we had to see all the major tourist attractions on Friday and Saturday morning. That turned out to be enough time. Dubai’s attractions are the sort you’d find in Las Vegas minus the fun stuff – like gambling and shows.

And it was hot. Brutally hot. With temperatures ranging from 100 to 120 during the day and dropping to 90 at night. The air was so humid my glasses fogged up every time I stepped outdoors.

But I shouldn’t complain. I was there to work. Our global publishing groups have become a significant part of our business, representing more than a dozen countries and hundreds of millions of dollars in revenues. Most of them face the same challenges we face in the USA: a competitive Internet publishing environment that is essentially ruled by the whims of Google and Facebook and the other large social media platforms.

Each of the publishers made a presentation about their significant triumphs and failures. What works in one country doesn’t necessarily work in another – but it can. And when it does, it can mean the difference between profit and loss, and growth and stagnation.

I made the final presentation: “10 Things I’ve Learned About Our Business in the Last 40 Years.”

When I submitted the title, I had no idea what those 10 things would be. Not the first time I’ve done this. I pick an audacious title – one that is likely to attract attention. Then I challenge myself to write something that measures up to it. This is not, however, a methodology that I would recommend. It can easily – at least theoretically – result in disaster. But it does raise the bar. In this case, given the fact that I was speaking to a group of very smart and accomplished senior people in our business, the bar was very high indeed.

What could I talk about? Sales and marketing techniques? No. They constantly come and go. My thoughts about current business conditions? No. They, too, would soon be passé. I decided to focus on something that never changes: the most important element of business success.

I once heard a TED Talk on this subject. The speaker posited that there are 5 major factors: ideas, management, timing, capital, and people. If I remember correctly, his choice for “most important” was timing. And although I understood his reasoning, I had a different perspective.

For me, the most important factor is people – the people you hire to make your business work.

Timing matters. But timing is something you can’t control.

Ideas matter. But without fantastic people making those ideas real, they evaporate like smoke.

Management matters. But management works only if you have good managers.

Capital matters. But much less than most people think. There is no amount of capital that will make a good business from a bad idea. And there are countless examples of poorly capitalized businesses that succeeded due to the intelligence and hard work of their employees.

To my mind, that makes hiring, training, motivating, and compensating extraordinary people the most important job of every one of our publishers. (And, by the way, of every CEO of every business.)

And once I had that nailed down, it wasn’t hard for me to come up with 10 bullet points for my speech.

In a future blog post, I’ll give you all 10. For today, I just want to emphasize one of the main points I made:

When you look back at a successful entrepreneurial career, it often looks like dumb luck. And many successful entrepreneurs, when asked about their success, often claim, modestly, that it was indeed luck. But if you ask them to elaborate, you’ll find (as Jim Collins famously said) that most of their “luck” had to do with putting the right people in the right seats.

* 39% of the luxury Burj Al Arab hotel (the fifth-tallest hotel in the world) is made up of empty space at the top.

* The 3 man-made Palm Islands were constructed with 94 million cubic meters of sand.

* There are plans to build an air-conditioned city in Dubai that will be twice the size of Monaco.

“Travel makes one modest. You see what a tiny place you occupy in the world.” Gustave Flaubert

Audacious (aw-DAY-shus) means bold, daring, fearless. As I used it today: “I pick an audacious title – one that is likely to attract attention. Then I challenge myself to write something that measures up to it.”

“The Land Where the Internet Ends” in The New York Times

The range of the Internet is fast expanding. Very soon it will cover just about every square inch of the world. But some people would like the government to preserve areas where cell phones cannot operate. The only hope may be areas where huge audio observatories operate. You can read the article here.

Is Windex safe? I don’t know. But here are six ways – aside from windows – to use it.