What You Can Learn About Investing From a Las Vegas Casino

The last time I was in Las Vegas for more than a business meeting was when my children, now grown and with children of their own, were in high school. We spent a week there, marveling at the mega-hotels, getting lost in the cavernous casinos, riding the rollicking rides, shopping in the scenic super-malls – generally swept away by the sounds and scintillations of that surreal, synthetic city.

Las Vegas offers a special kind of fun. It won’t give you the expansive fun of trekking the desert or the aesthetic enjoyment of walking through Rome. It’s more like a B movie or a Keno girl cinched up in lace and silk stockings: a type of sensory indulgence that you can’t be proud of but you don’t feel ashamed of either.

I remember the reaction of Son Number Two, who was reading Will & Ariel Durant’s history of ancient Rome at the time. Shaking his head, he kept saying, “This is surely the end of the American Empire.”

One can’t deny that thought. In terms of size, sumptuousness, and spectacle, there is no other place in the world like Las Vegas. (I’ve not been to Dubai.) The vast, opulent malls America pioneered in the early 1990s prepare you for the size of it – and Disney World/Land can give you an idea of how friendly replica environments can be. But they are but cartoons to the masterpiece of marketing and merchandising that is Las Vegas. Las Vegas is a one-and-only and offers a sui generis experience to all who visit.

A World Unto Itself 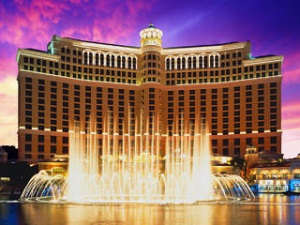 The casino is larger than several football fields and jam-packed with roulette tables, poker bars, and one-eyed bandits. It has its own mall… a deluxe promenade that rivals Worth Avenue or Rodeo Drive, featuring the same deluxe stores (Gucci, Armani, etc.) you can now find in every major tourist city around the world.

Walking into the lobby you can’t help but be awed by Dale Chihuly’s Fiori di Como, a glass sculpture composed of 2,200 hand-blown glass flowers and covering 2,000 square feet of the ceiling.

In addition to dozens of casino-side eateries and buffets, the Bellagio offers at least a dozen first-class restaurants, bars, and nightclubs within its buildings, as well as several theaters.

Outside, a water show takes place every 30 minutes. It is a wonder of science – computer engineering and plumbing – that provides a spectacular, three-dimensional representation of show tunes and opera that ranges from charming to breathtaking.

And there is the Bellagio Fine Art Museum, which displays, I was surprised to discover, large (if not great) works by Picasso and other 20thcentury masters.

The first half of the Bellagio cost something like $1.6 billion in the mid-1990s. The second half, built later, cost more.

Three billion dollars is a lot to risk on a new business. But was this a gamble?

Were the people that invested in the Bellagio back then gambling? Were they, like the people sitting at the casino’s blackjack tables and slot machines, risking their money against the odds?

Or would you call it an investment?   READ MORE

This gets us to a distinction I’ve been making for years: the difference between gambling and investing.

And I think that is largely correct.

The people playing blackjack and slots are definitely gambling. But when Steve Wynn and his partners were investing in the Bellagio, is that what they were doing?

The Bellagio did not exist, so they were definitely putting their money down on the future. But what about the odds?

Steve Wynn was not a slot machine. He was a brilliant man with experience, a proven track record, inside knowledge of how the gambling business works, and connections with people in high places, etc.

And though he and his partners were putting their money down on a future speculation, the odds were stacked heavily in their favor.

So I would say that what those early investors were doing wasn’t exactly gambling. Call it smart gambling, if you like. Or intelligent speculation.

Now… what if you buy stock in MGM Resorts International today? (That’s the public company that owns the Bellagio as well as the Mandalay Bay, the Mandarin Oriental, the MGM Grand, the Mirage, and a half-dozen other super-sized casinos.)

If you do that, you are definitely spending your money on today’s facts. So, as I’ve always defined it, you would be investing.

But would that be safer than what Steve Wynn and his partners were doing back in the 1990s?

Okay, I think we need some new terms here.

Gambling we will leave as is. It’s what casino customers do. It’s also what anyone does when they “invest” in anything when the odds are stacked against them.

What were Steve Wynn and his partners doing? They were risking money on the future. But the odds were stacked in their favor. So let’s call that intelligent speculation.

And what would you or I be doing if we bought shares of MGM Resorts today?

I would say that depends on why we bought those shares.

* If we knew just a little about the gambling industry and were buying shares based on a rumor of some future merger, I would call that gambling. But let’s use our own term. Let’s call it ordinary speculation.

* If we knew a lot about the industry and were buying shares on the certainty of some future merge, I would call that intelligent speculation.

Every Problem Should Have a Simple Solution