The Story of English by Robert McCrum, William Cran, and Robert MacNeil is a readable encyclopedic history of the English language. It is well written and includes as much history of England as it does of English itself. I’m enjoying it. I will spend years reading it, I think.

“Charity is injurious unless it helps the recipient become independent of it” – John D. Rockefeller

The word “salary” comes from “salt,” the oldest preservative and one of the earliest currencies.

Egalitarian (adjective) – Egalitarian (ih-gal-ih-TAIR-ee-un) means asserting, resulting from, or characterized by belief in the equality of all people. As I used it today: “They were shy and I did my best to relax them in that American sort of egalitarian way.”

The Challenge of Charity: My Failure to Help Marcus and Gabriela

Marcus and Gabriela came to work for us in 1999 after we built a second home in Nicaragua.

Marcus tended the landscaping. Gabriela kept the house. Antonio, my Nicaraguan partner, had recommended them to us. Their parents and siblings had worked for him.

They were very young at the time – in their late teens or early twenties. But they were already burdened with the responsibility of being parents. Gabriela’s husband worked in construction. Marcus’s wife worked part-time cleaning at a local restaurant.

Neither spoke a word of English, so we had to communicate in the very rudimentary Spanish I had at the time. They showed up every morning at 7:30 and worked, not energetically but dutifully, until 3:30. Then they were gone. In those early days, they left without saying goodbye.

They were shy and I did my best to relax them in that American sort of egalitarian way. But Nicaragua, like all countries, lives with its history. And the vestiges of Spanish colonialism still existed. Most upscale households in Nicaragua employ domestic workers, who are, I gathered from observation over the years, treated with respectful condescension.

I asked Antonio what I should pay them. He told me $150 a month.

“That’s the going wage,” Antonio assured me. ”If you pay them much more, it will cause problems in the community – for them now, and for you later on.”

I knew that he was right, but I wasn’t going to accept it…

I sat down with Gabriela and Marcus and told them that if they wanted to earn more money, I could give them jobs that fell outside of their normal duties. Marcus could give a room a new coat of paint. Gabriela could plant flowers along the side of the garden. That sort of thing.

And they could do these extra chores during their regular hours, I told them. (Which would work out just fine for me, because I didn’t really have eight full hours of work a day for them.)

I thought they would be delighted with the opportunity, but they were not. Nestor, a local friend and colleague, explained their lack of enthusiasm.

“They probably think you are trying to take advantage of them by asking them to do extra work,” he explained. “Even for extra money.”

It was another vestige of the country’s history – in this case, the years it had existed as a Communist state. 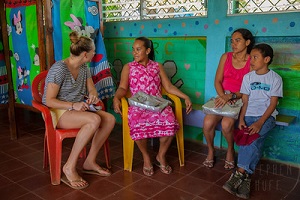 But although they were reluctant to do “extra” work, they were not averse to asking for financial “help” with family problems – a sick parent, a leak in the roof, etc. I was more than happy to give them what they needed, but I insisted that they work the “extra” hours for the extra money.

For a few years, it seemed to be working well. They used the extra money they earned to buy themselves bicycles, cell phones, and clothing.

But when I had the opportunity to visit their homes, it was clear that the extra money had bought them all sorts of things that put them in the upper economic ranks of Limon, the hamlet they lived in. Still, like everyone else in the area, they were living in simple mud and wood shacks.

Despite free-market views to the contrary, this huge gap between their homes and mine bothered me. I had to find a way to increase their income yet again so they could at least have proper windows, doors, and floors.

So I came up with a solution that was popular among charity advocates at the time: I’d give them micro-loans to start their own side businesses. My idea was that they would follow the strategy I’ve recommended for years to other would-be entrepreneurs: Start small. Test the product and the pricing and the pitch as quickly and efficiently as possible. And then, if the business starts to take off, expand.

Considering their earlier reluctance to do extra work for pay, they were surprisingly open to the idea of having side businesses, businesses that could be run by an unemployed sibling or relative while they were at their regular jobs.

I told them, stupidly in retrospect, to choose the businesses they wanted to have. (I thought that this would provide them with the extra motivation they might need to succeed.)

Gabriela decided on a children’s clothing store. Marcus decided to open up a pulperia, a rustic version of a mini 7-Eleven, in front of his house.

Watch This: This Swedish performer adds an extra dimension to magic.