Are You An Information Addict? 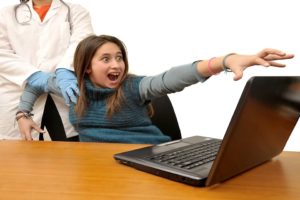 “Let’s have lunch,” DK said in his email. “There’s something I need to talk to you about.”

Two days later, we were eating chopped chicken salads at City Oyster on Atlantic Avenue. We talked a bit about family news, but it was clear that he wanted to talk about a question that was on his mind.

The question: Should he spend $100,000 on the highest level of an internet marketing program that he had been looking at?

“It looks really good,” he said. “But I’m not sure it makes sense for me to invest that kind of money.”

“A hundred grand is a lot of money,” I said.

“But you get an awful lot for it,” he explained. “They do all the technical stuff for you, which I’m not very good at. All I have to do is come up with the product idea.”

The waitress filled our drinks.

“So if you invest in this marketing program… what kind of products would you sell?” I asked.

“How about this: If you had all the money you could ever need, how would you spend your time? What would you do to give your life purpose?”

“That’s a good question,” he said. “Actually, I like the idea of purposefulness. Maybe I’d do something along those lines.”

I told him that if I were he, I’d not spend a hundred grand on a program that gave me marketing and operational tools until I knew what I was going to do with them.  READ MORE

The Amazon rain forest produces half of the world’s oxygen supply.

“Mediocrity wants to be your friend. Be unfriendly.” – Leslie Miklosy

The first time I saw The Graduate (1967, the year it was made), I was a junior in high school, and I thought it was a great movie. I saw it again about 25 years ago, and was happy to discover that it still worked for me. And I saw it again last night and still liked it. It had passed the test of time. But my response to it this time was different.

In 1967, I loved it because it seemed to perfectly depict what was then called “the generation gap” – the moral and intellectual gulf between my generation and our parents. I identified strongly with Ben, the main character (played very cleverly by Dustin Hoffman). I approved of the plot and the implicit critique of upper-middle-class values. I also liked the many cinematic tricks director Mike Nichols employed, the clever cuts and overlaps. And, of course, I loved the score, which was written by Paul Simon.

Watching it for the third time last night, I found the plot to be just as compelling, the music nostalgically engaging, and the cinematic effects dated but still effective. What was different was that I had difficulty identifying with Ben… and the moral dilemma of the story disturbed me. I could no longer see Ben as a sympathetic character. I was with him 100% in his inability to resist Mrs. Robinson, but I couldn’t excuse him for falling in love with and then courting her daughter. Fifty-one years later, I was no longer identifying with the 20-year-old Ben but with the husband he cuckolded.

“A Black Man Goes Undercover in the Alt-Right”:An independent thinker…

Worth Quoting: “Mediocrity wants to be your friend. Be unfriendly.” – Leslie Miklosy

Today’s Word: tergiversation (noun) –Tergiversation(tur-jih-ver-SAY-shun) is equivocation; the act of being deliberately ambiguous. As used by Tobias Smollett in The Expedition of Humphry Clinker: “I must tell you, however, in confidence, I suspect Tabby of tergiversation.”