It’s impossible to see the pyramids of Giza, the Colossus of Rhodes, or the Great Wall of China without thinking about the will it must have taken to build these wonders of human creation. They were built thousands of years ago when the technology for building at that scale didn’t exist.

Even something as “ordinary” as the Palace of Versailles, built in the 17thcentury by Louis XIV, is awe inspiring. 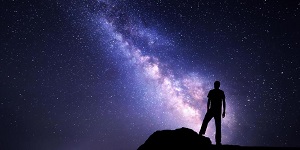 And that’s to say nothing of scientific or business or military accomplishments.

Most of what we think of when we talk about human “achievement” is the result of one part inspiration and nine parts long and sustained effort, often under difficult conditions, focused toward a specific objective.

In fact, this quality of sustained and focused activity towards “making” new and bigger and better things could be said to be distinctly human. Animals are capable of hard and sustained work to create food and shelter, but they do not create new things for the purpose of bigger and better.

Put conversely, if human beings were not capable of such focused effort, civilization would have enjoyed few (if any)  scientific, industrial, social, and even artistic innovations throughout history.

The impulse to fix, improve, enlarge, and beautify seems to be hardwired into our brains. There is no human society that hasn’t produced inventions and art.

But what is the thing that drives people to do these things?   READ MORE

Ratiocinate (verb) – To ratiocinate (rash-ee-AH-sih-nate) is to reason, to figure things out. As used by Robert Louis Stevenson: “But I give you warning – Stasie may weep and Henri ratiocinates – it will not serve you twice.”

Satori in Paris by Jack Kerouac is a short, semi-autographical novella about a trip the author took to Paris and Brittany to look into his family’s genealogy. Full, chock full, of interesting (though sometimes irrelevant) facts that display Kerouac’s fluency in French and knowledge of history, language, art, Buddhism, and literature. It is saved from pretention by the loose and easy writing style. Although written after he returned to Florida (didn’t know that he lived in Florida), it reads as if it was written as notes while he was traveling. Maybe most of it was.

The style is effective. And it seems like it could be emulated. I am inspired to try to write like him, just as Hemingway’s sparse but poetic style makes me want to imitate him.

Rotary Phone:It’s humbling to have to ask a teenager to help you sort out a problem with one of the myriad devices on your iPhone. Here’s a video that will make you realize that the kids are not necessarily as smart as you think.